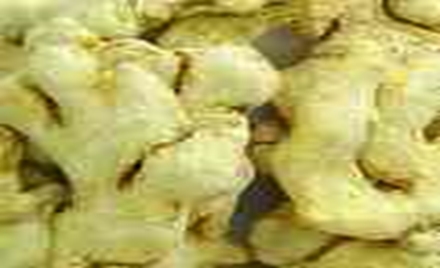 Description: Ginger (Zingiber Officinale) is a commodity that is highly valued in international markets for its aroma, pungency and high oil and Aleo resin content. Nigeria is the third largest exporter of ginger in the world after China and India. Most of the dried ginger that are available for international trade are simply sun dried over a few days, but artificial drying is also used in areas lacking a defined dry season to coincide with the harvest. The rhizome is dried to between 10 and 12 per cent moisture content. Dried ginger is usually presented in a split or sliced form. Splitting is said to be preferred to slicing, as slicing loses more flavor, but the sliced are easier to grind and this is the predominant form of dried ginger currently in the market.

Harvest: harvesting of ginger starts from October and normally continues until April/May. This largely depends on the market situation as ginger can be left on the ground (not harvested) for two years.

Locations: Ginger is produced in six states of the Federation namely, Kaduna, Nasarawa, Benue, Niger and Gombe with Kaduna as the major producer. Nigeria’s production in 2005 was estimated at 110,000 metric tons (FAO). Out of this, 10% is locally consumed as fresh ginger while 90% is dried primarily for the export markets.

Payment: By Confirm L/C or Cash Against Document with 30% Advance Payment.

Uses: The list of ginger uses is almost endless, being a pungent spicy herb and one of the more popular food spices. They range from baked products like gingerbread, ginger biscuits, and ginger cookies to drinks like ginger tea, ginger beer, ginger ale, etc. Ginger contains about two per cent essential oil. The oil is extracted and distilled from rhizomes for various uses in confectionery, perfumery, beverages and pharmaceuticals. Dried ginger is used predominantly for flavoring coffee especially in the Middle East. It contains medicinal qualities and it is also used to calm nausea and aids digestion. Dried ginger is used in many different cooking methods. It is an important spice in Asia, the Caribbean and African cooking.