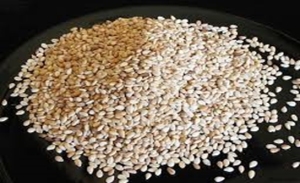 Locations: The major producing areas in order of priority are Nasarawa, Jigawa and Benue States. Other important areas of production are found in Yobe, Kano, Katsina, Kogi, Gombe and Plateau States. The major marketing centers (towns and states) of sesame seeds in Nigeria are in the table below.

Types/Varieties: There are 2 types of sesame produced in Nigeria

The White (Food Grade) seed is grown around the towns of Keffi, Lafia/Makurdi, Doma, and in Nassarawa, Taraba, and Benue States. It is easier to sort and the Fumani/Denin people consume sesame locally.

The Brown/mixed grows in the North, in Kano State and in Jigawa State near Hadejia, and somewhat in the southern part of Katsina State.

Export market: The major importer of sesame seeds in the world is Japan while the major consuming markets in the EU are Greece, Germany, the Netherlands and the UK. In the past, the bulk of sesame was imported from China. Increasingly, other sources such as India, Sudan and, most recently, Pakistan, are taking the market share. The USA is the fifth largest import market with a steady demand for over 50,000 tons per year.

Export & Packing: The export 50Kg in a bag and 360 bags in a container free on board FOB, CNF, CIF

Payment: By Confirm L/C or Cash Against Document with 30% Advance Payment.